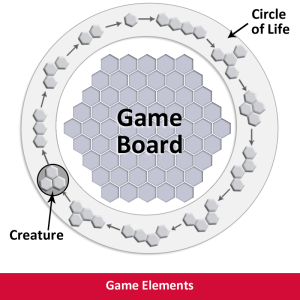 I have recently begun playing games on http://www.boardgamearena.com, which is a great place to play some classic board games online with random people. One of the more recent additions was this game called Circle of Life, made by Nick Bentley. You can check out the website here. I have basically fallen in love with this game, and I always try to tell other people. However, the rules that “fit on a napkin” sometimes prove to be just clunky enough to make people get lost.

I was having a lot of fun playing Nick’s game, but as I was trying to explain it to another person, I realized the game’s rules were not quite as easy to understand as they could be. Yes, it only takes around 2 minutes to learn, but you could chop that down to 30 seconds with the proper approach. For a game this simple

That’s why I decided to create a visual set of rules for people to use. Instead of a few paragraphs, I have a set of five pictures that simply and succintly show how to play this great game.

You can view the rules I have made here.