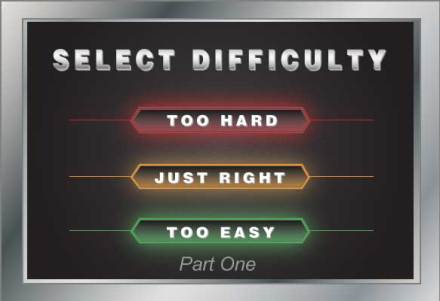 We all know that difficulty is a major part in the enjoyment of a game, if a game is too easy or too hard, it won’t be fun for the player.

But, what exactly makes something difficult or easy? Something as enigmatic as the concept of difficulty is rather challenging to break down, as there is no simple metric for difficulty.

First, let’s look at the types of difficulty found in games. There are three essential types of skills used when playing games:

These are the three basic forms of difficulty found in all games, and they can be combined, altered, increased and decreased based on the game and the player. I will explain them one at a time to try to accurately describe how they affect games.

Let’s start with the easiest one to understand: execution, otherwise known as “mechanical difficulty”.

Simply put, execution difficulty is the difficulty associated with… well… executing certain moves in a game. These moves usually have a sense of precision or timing as the main indicators of difficulty. A headshot in an FPS game or a complex combo in a fighting game are two such examples.

Games often use this as the simplest performance-to-reward system, as it is a very direct, binary test. You either fail, and you miss/fumble/whatever, or you succeed and you perform the action.

In Street Fighter, in order to perform long combos, you have to be able to perform the special attacks with a certain degree of accuracy and timing in order to prevent your opponent from breaking out. In Super Meat Boy, many jumps require “pixel perfect” positioning to be achieved, where if you are but one pixel away, you will die.

Entire game sub-genres have been built to highlight this part of difficulty. Most of the “super challenging” games like Super Meat Boy and I Wanna Be The Guy have a high execution difficulty as one of their main selling points. Also, this type of difficulty is the easiest to combine with other types of difficulty, as it can be applied to almost any action the player wants to perform. However, it is one of the most “dangerous” types of difficulty, as players who cannot do things will be very frustrated and, depending on the player, may quickly give up on such a game.

Like execution, this is a very binary skill, but it is also very hard to implement around other forms of difficulty in a smooth and organic way. Some games will pull a “What was the colour of the shirt of the third character to appear, 40 hours ago”, but those are not fun in any way.

One way games will implement this is in boss battles with large and sweeping attacks. Super Meat Boy has one such boss, the attacks can come out quickly and unexpectedly kill you if you are unprepared. But, if you know the boss’ movements, the fight becomes trivial.

Guitar Hero follows a similar approach with its harder songs. The notes can be nigh-impossible to hit with sheer reaction alone. They are too close together and too fast for a normal person to be able to beat without any prior knowledge. It is almost expected for you to memorize the pattern to beat the higher difficulties.

Another aspect, more commonly found in multi-player games, is the concept of a meta-game. Basically, the meta-game is often used to describe the “best” tact for any given situation, like what moves will cause the most damage or let you win the quickest. In a sufficiently complex game, like Starcraft, this metagame can be very complex indeed.

As a player, you are likely expected to memorize the “meta-“actions (the best actions), and their lead-ups. Don’t forget the anti-meta-actions (counters to meta-actions) and anti-anti-meta-actions (counter to the counters). Being able to immediately know that since the enemy is setting up this way, it means they are going to do that, that or that can be very important in high level matches.

This is the most enigmatic and difficult to test, design and implement. Simply defined, strategy is the ability to make the most out of little. This is a very broad definition, so I prefer to use the following:

“The ability to make correct decisions to lead to an overall goal based on limited knowledge, resources and power.”

This encompasses many things like micro and macro decision making, situational observation and reaction, and battle plans. It can cover things from optimization to the exploiting of glitches.

There is virtually no way of “properly” testing a player’s strategy.  There are a number of problems that many games have when trying to come up with a game being strategically difficult, especially with single-player games. Often, you find that the best single-player games are based on a multi-player element, like tabletop games. A notable example is the X-COM series, which takes a lot of inspiration from tabletop games like Warhammer.

Now, these three things are wonderful aspects of “true” or “real” difficulty, but what is “artificial” difficulty? Plainly put, it is difficulty that is not fair in any way for the player.

Continue onto part-two, where I talk about the ever vague “artificial difficulty” and how it is defined.